Tailoring Vintage By the Seat of My Pants 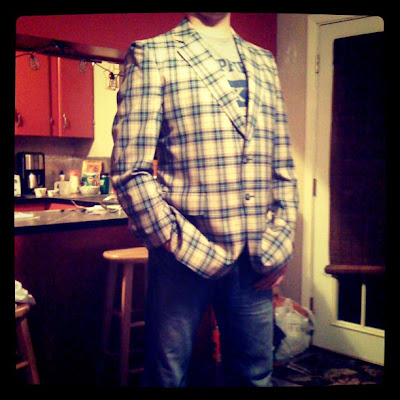 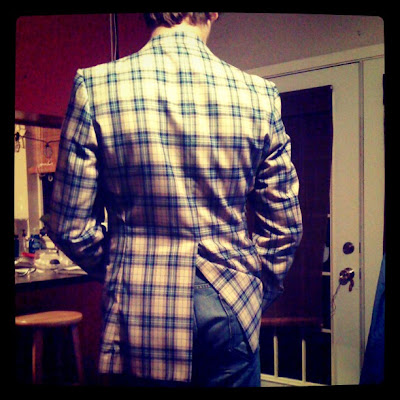 Once or twice a year, the Mid-City Merchant's District in Baton Rouge hosts a block party (it's more like a two mile stretch of road party) called White Light Night. All the businesses and art galleries open up and have wine and snacks - this type of event reaffirms my love of small city living.

This past White Light Night, already a little tipsy from our previous stops, Gus spotted this jacket in one of Baton Rouge's finest vintage establishments, Time Warp. Now, at 6'3" with a slim waist Gus is a tough fit when it comes to jackets, and finding something vintage for him is even harder. So you can imagine his excitement when the shoulders of this beauty fit him perfectly. The waist, however, was a bit boxy - like he was en route to a MadMen themed party rather than legitimately rocking a vintage find.

I found Gus in this jacket debating its merits with the sales girl - and told him, in my drunken certainty, that at $25 it was a must-buy and I would tailor it for him NO DOUBT! It's not often you go shopping drunk - I was caught up in the moment.

The next morning I got cold feet. This was a MEN'S JACKET with LINING!?! And what did I know about tailoring? Oh boy.

But however cold my feet may have been, I promised my Gus... So I ripped out the stitching at the base of the lining. (Interesting fact: the thread used was elastic, but loose.) I reached up into the jacket and took in the side seem in the shape of a shallow V - that way I could taper the seam into the arm hole and hem without having to alter either.

I was nervous. I braced myself for an awkward pause as Gus would try on his malformed jacket and then politely try to explain why it was okay that I ruined it.

But my worries were for nothing. I brought the tailored jacket to Gus's place... and he proceeded to vogue in the full length mirror until I started teasing him about it. The final touch: I moved the buttons in by 1/2 and inch.

Here is the blurry BEFORE PHOTO (taken at White Light Night, immediately post-purchase): 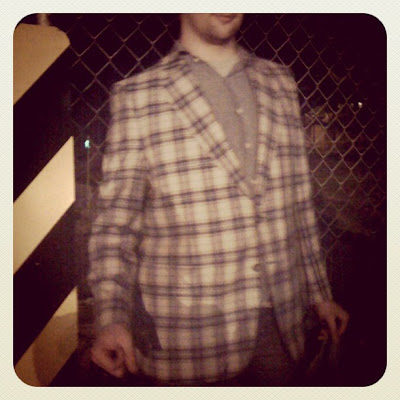 Around the same time this tailoring all went down, Gus purchased a beautiful 1950s record player from a new record store in town, Vintage Vinyl at The Atomic Pop Shop. This fabulous piece of furniture now takes up an entire wall of his apartment. Totally worth it. Now we're jammin' to Ellis Marsalis daily. (Gus would like you to know that the late-70s Ellis still plays some Tuesdays on Frenchman Street in New Orleans. Baller.) 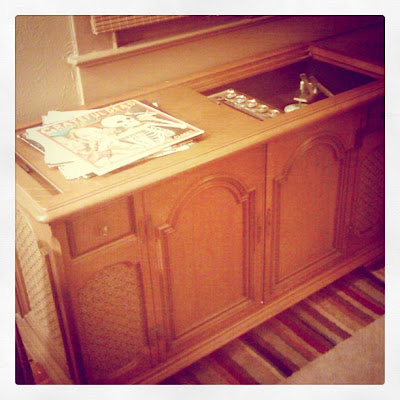